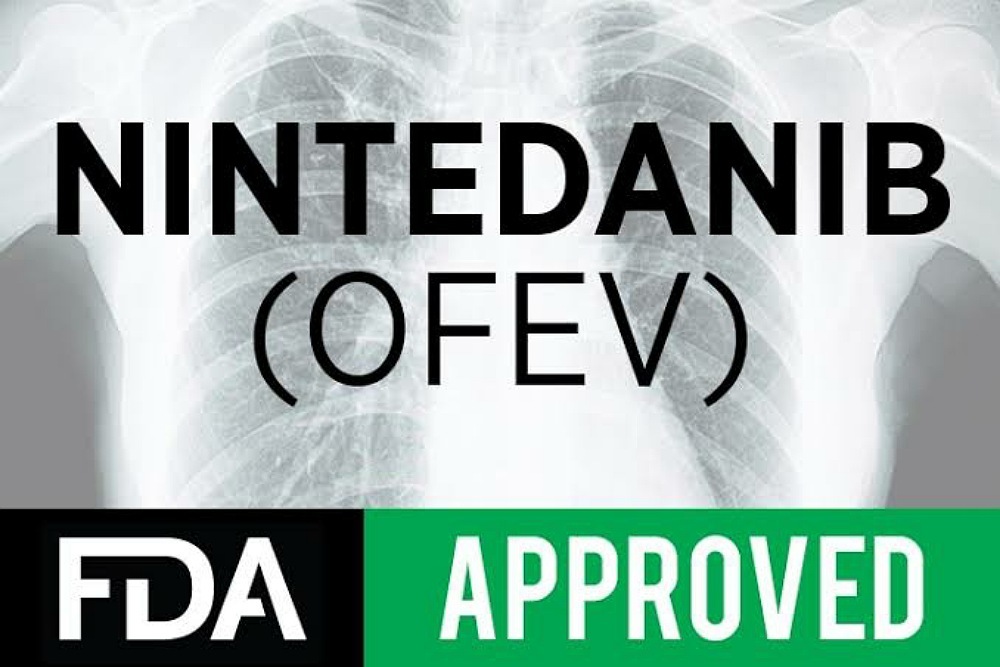 The U.S. Food and Drug Administration today approved Ofev (nintedanib) oral capsules to treat patients with chronic fibrosing (scarring) interstitial lung diseases (ILD) with a progressive phenotype (trait). It is the first FDA-approved treatment for this group of fibrosing lung diseases that worsen over time.

“The FDA continues to encourage the development of therapies for patients with limited or no treatment options,” said Banu Karimi-Shah, M.D., acting deputy director of the Division of Pulmonary, Allergy, and Rheumatology Products in the FDA’s Center for Drug Evaluation and Research. “Today’s approval helps to fulfill an unmet treatment need, as patients with these life-threatening lung diseases have not had an approved medication until now.”

Chronic fibrosing ILD with a progressive phenotype encompasses a group of fibrotic lung diseases caused by different underlying diseases or conditions, including autoimmune ILD, hypersensitivity pneumonitis and idiopathic nonspecific interstitial pneumonia. Characteristics of chronic fibrosing ILD include lung scarring and rapid disease progression, as assessed through worsening lung function tests, symptoms and/or imaging. Progressive lung scarring leads to breathlessness and respiratory failure. Lung function declines over time among these patients and can be debilitating and life-threatening.

Ofev’s safety and effectiveness to treat chronic fibrosing ILD with a progressive phenotype in adults was evaluated in a randomized, double-blind, placebo-controlled study of 663 adults. The mean age of patients was 66 years and more patients were male (54%) than female. The primary test for effectiveness was the forced vital capacity, which is a measure of lung function. It is defined as the amount of air that can be forcibly exhaled from the lungs after taking the deepest breath possible. In the 52-week period, patients received either 150 milligrams of Ofev twice a day or a placebo. After 52 weeks, people who received Ofev had less lung function decline compared to those on the placebo.

The most common side effects reported in the Ofev clinical trial were diarrhea, nausea, stomach pain, vomiting, liver problems, decreased appetite, headache and weight loss. Ofev is not recommended for patients with moderate or severe hepatic (liver) impairment. Elevated liver enzymes and drug-induced liver injury and gastrointestinal disorders have occurred among people taking Ofev. It may also cause embryo-fetal toxicity that can result in fetal harm, arterial thromboembolic events (blood clots), bleeding and gastrointestinal perforation (hole formation). P-glycoprotein and CYP3A4 inhibitor drugs, including ketoconazole and erythromycin, may increase nintedanib exposure, and patients taking these inhibitors with Ofev should be closely monitored.

Ofev received Priority Review designation, meaning the agency plans to take action on the application within six months because the drug, if approved, would significantly improve the safety or effectiveness of treating, diagnosing or preventing a serious condition. It also received Breakthrough Therapy Designation, which is designed to expedite the development and review of certain drugs intended to treat a serious condition.

Ofev was previously approved to treat idiopathic pulmonary fibrosis and to slow the rate of decline in pulmonary function among patients with ILD associated with systemic sclerosis or scleroderma.

The FDA granted the approval of Ofev to treat ILD with a progressive phenotype to Boehringer Ingelheim Pharmaceuticals, Inc.